A little late, but I am finally getting around to the post. Yesterday was just too darn busy dealing with a broken trailer hitch, offloading sheep, rearranging sheep living arrangements, and trying to put away the pile of stuff that landed in the foyer. Not to mention a few sick kids, plus that whole "sleep" thing.

So without further ado, I bring you the one word summary of the weekend:

COLD.
If you remember, MDS&W's word was WET, so clearly we have an extreme weather condition theme going on for the 2009 fiber fests, at least the ones that I attended.
As anyone who spent any time in my presence this weekend can attest -- and I am apologizing now for my lunacy -- the close contender for the theme was STRESSED. Terzo came down with H1N1 the night before I was due to leave; unfortunately, cancellation was out of the question for a number of reasons. (Yes, I know this knocks me out of the running for the mother-of-the-year award, but let's face it, I was already disqualified on a number of other grounds.)
With hours left until departure, the plans for the weekend underwent a massive upheaval and Primo ended up coming along for all three days. This is probably the last time this will happen for a while due to his impending entry into high school. He enjoys it so much -- especially when he doesn't have to share the experience with a brother or two -- that I tried to remember to savor this weekend with him.
We packed as if we were going to the Arctic Circle for a few days, with flannel-lined jeans, thermal underwear, wool socks and hats, and many, many layers. You know it's cold when your teenage boy elects to wear a hat and thermal underwear all weekend. Luckily, although it was overcast, it did not snow as predicted and rained only for a few hours, so we counted our blessings.
I carried my camera around with me the whole time, but ended up with remarkably few pictures. I did manage a picture of the booth, in all its glory, on Saturday morning. 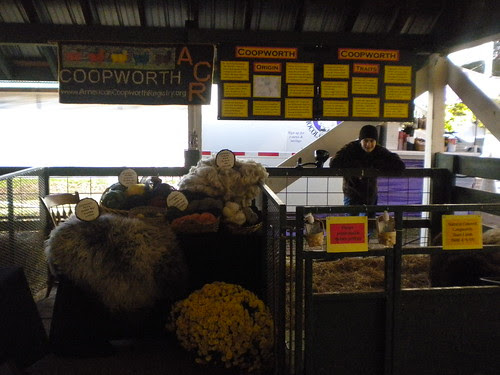 I have to say, I was pretty pleased with the result, which was based upon the K.I.S.S. principle. As it turns out, so were the judges. 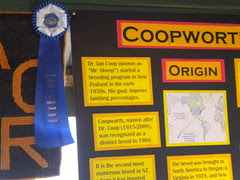 The only other picture I have is Primo showing our new ram, Isaac.

The judge was not so pleased with the sheep, but we weren't too concerned about that because her decisions seemed to be largely based on size. In that type of showring, a medium-sized sheep breed like ours is competing for last place, and sure enough, my mom noted that we were the top of the bottom quartile in our class of 21 animals.
Things that I did not get a picture of:


And other various and sundry purchases that are lost in the fog of this weekend. Overall, thanks to my parents and eldest son, I did end up having a wonderful time despite all the stress. 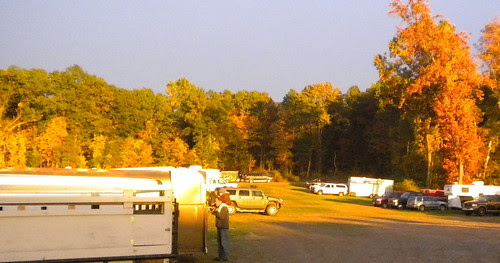 Just as we were packing up to leave, the sun made its first appearance all weekend. Too bad there were few fairgoers around to enjoy it. At least the vendors and exhibitors got a reward for all their hard work.
Posted by Kris at 9:53 AM