evolution of a halloween costume

This wasn't much of a year for Halloween costumes, unfortunately for my youngest. Too much else going on, with 5K races and college applications and high school adjustment issues. He ended up going as Harry Potter, in a wizard robe I made for his oldest brother about ten years ago. The year before he was born, and the last year I sewed a costume. No coincidence there. 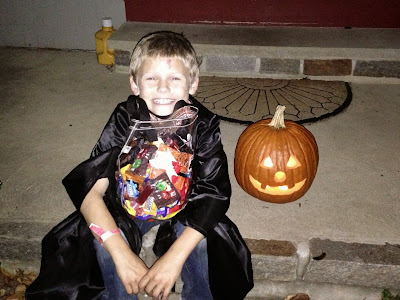 He got to hang out with a friend and trick-or-treat all afternoon, which somewhat made up for his brothers not going out with him for the first time in his life. I can't think about that for too long, or I will really be depressed. He ended up with quite a bit of candy, and the Great Pumpkin paid a visit to our front porch with a hand-carved pumpkin, so he was happy enough.

Speaking of hand-sewn costumes, although I didn't get too many done for my kids, the ones I did get done—usually with my mother's assistance—are proof that the time investment can be well worth it. Unlike other costumes, those got worn over and over again.

Take the turtle costume I made for Primo, when he was two and I had all the time in the world with only one child on my hands. 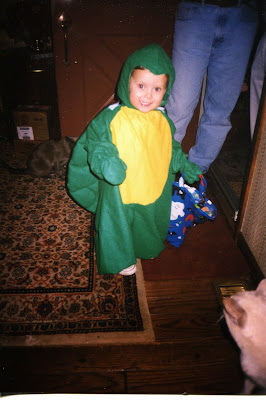 It was recycled for his little brother, exactly three years later (when Secondo was two), as part of a dual "tortoise and the hare" costume. Yep, the rabbit was also hand-sewn. 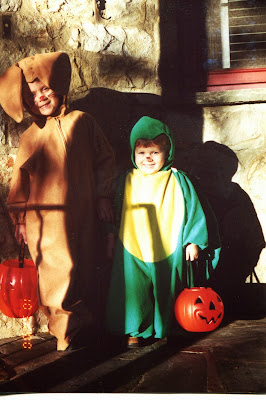 Five years later, we had another turtle victim, but I note that the other costumes were purchased or borrowed. No sewing by this point. 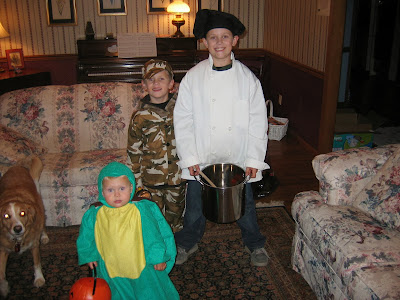 Clearly, the reason why the turtle costume was so well used was because, at two years old, the wearers were easily forced into wearing it.

Then it was pressed into service for a sheep (also not able to protest, though the look in her eye speaks volumes), for a 4-H fair costume contest: 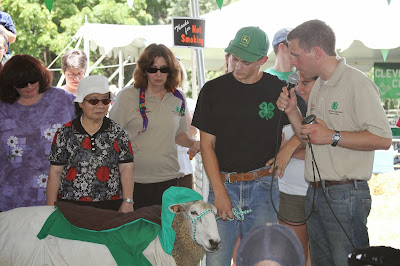 She was a Teenage Mutant Ninja Sheep.

It seemed like end for the turtle costume, but we managed to use it one last time, because it  is super-roomy in its construction so a toddler can wear a winter coat underneath... 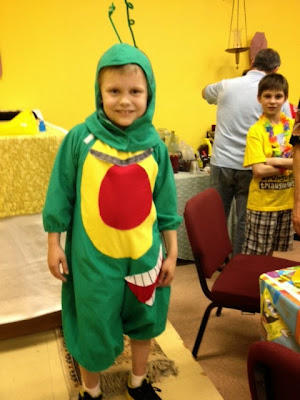 Thanks to the wonders of stick-on felt, it was transformed into Plankton for a SpongeBob SquarePants theme at a church party. You can see it if you squint.

I think we are pretty much done with the turtle costume, much to everyone's relief. Unless I manage to get it on the dog...
Posted by Kris at 9:04 PM